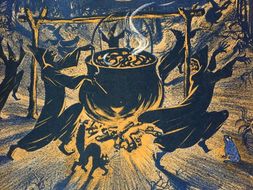 Witchcraft A Threat?
A recent Pew study has shown that during the Obama presidency, the number of professing Christians in America fell by a full 8%. Meanwhile, the number of self-professed witchcraft participants rose dramatically. In fact, in 1990 there were approximately 8,000 professed Wiccans in the U.S. and, as of October of this past year, that number is estimated at 1.5 million- with an increase of over 1 million in the last ten years. There are 100,000 more Wiccans than Presbyterians, to give it some scale.
I agree with many that we are and have been for a few years, living in a ‘post-Christian era’, mainly because the numbers don’t refute that statement, but support it. This should come as no great shock to any disciple of Christ. This is just the beginning of the end of this age and we haven’t even seen the start of true persecution in America as of yet. The good news is that things are happening exactly as they were foretold by Christ. The really good news is that, as true believers, we are protected by the blood of Jesus and if He is for us nobody stands a chance of coming against us - and certainly not the likes of witchcraft, hoodoo voodoo.
For three years in Miami, I ministered deliverance and spiritual house cleanings in houses of various kinds of witchcraft, from Santeria to Voodoo to Macumba and have ministered to 'high-level' witches, including the head of the Church of Satan for the entire eastern seaboard. I can tell you that as long as you’re walking in the authority of Christ, there is no spell that has been or ever will be conjured that can harm you - and that every knee shall bow, period. Now, more than ever in recent times, it’s time to put on your big boy Jesus pants and stand tall. Walk in HIS power and HIS authority and stop whining. Instead, go slap a little Holy Spirit BOOYAH on the satanic - Who you gonna call?
Posted by First Love Missions at 4:23 PM