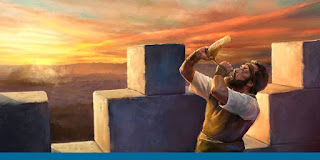 Prophetic Watchmen
One of the things I do when I study is to look at the Hebrew and Greek meanings of words which always leads to a deeper understanding of what God actually meant when He said what He said. When we look in scripture at the word and context of ‘watchman’ and look at the Hebrew, we'll encounter words like Tsaphah (to keep watch; peer into), Shama (to hear; listen intently), Zahar (to warn), Shamar (to restrain or confine), natsar (guard from danger what is most important).
Unlike English, each Hebrew letter, or symbol in its 22 symbol alphabet has its own meaning, so when you string these symbols together to form words you get a much deeper defined meaning of the word. Each symbol also has a corresponding number assigned to it. They are also, at times, composed of more than one ‘letter’. For example, the symbol ‘Heh’ (or hey) ה, is actually comprised of the letters dalet and yud. The vertical and horizontal lines of the dalet represent the physical world, while the vertical yud signifies the spiritual world. Therefore the ‘hey’ represents the physical and spiritual realms or a combination of the two. It also correlates to the number 5, grace, because of its usage in the Hebrew name for God. There’s much to say on each Hebrew symbol but I’m not going to bore you with the details – because I know you will be. I want to get to the nuts and bolts here. Hebrew symbols have changed in appearance a few times throughout history but the meaning of each individual symbol has remained the same from the beginning of time.
The most common symbols in the words I’ve mentioned above are these:
Heh (or hey)- ה - means ‘to reveal or behold’
Ayin – ע – means ‘to see and understand’
Cheth (or het) – ח - means ‘to protect or tend to’
Shin – ש – means “to consume or destroy”
Reysh (or resh) – ר – means “what is most important”
Phe (or peh) – פ – means “”to speak, command or present”
Putting it all together, ‘A watchman is one who restrains evil by warning (speaking) what is revealed in order to protect what is most important to God.’
Watchmen watch and listen, understanding what they see and hear and they speak it! They have a purpose in reporting what is revealed regardless of whether or not the warning is heeded. A watchman isn’t necessarily a prophet but a prophet is also a watchman.
Posted by First Love Missions at 4:50 PM