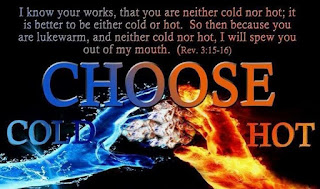 “I know your deeds, that you are neither cold nor hot; I wish that you were cold or hot. So because you are lukewarm, and neither hot nor cold, I will spit you out of My mouth.”
Laodaicea was part of the Roman province of Asia and was located about 100 miles west of Ephesus in a valley where the Lycus river flows into the Meander river. Laodaicea was a center for trade and the merchants were wealthy. In fact Laodaicea was the financial hub of the entire region around it. About six miles northwest from Laodaicea was Hierapolis, which was famous for its mineral hot springs. Hierapolis had an aqueduct system that flowed down to Laodaicea. The issue was that by the time this hot water reached Laodaicea, the water was lukewarm and undesirable. Recent archeology of the Roman pipeline has also shown that this water was heavy with calcium, making it almost unpalatable for drinking. In contrast, the nearby city of Colossae, just a few miles upriver from both Hierapolis and Laodaicea, and for whom the book Colossians was written, had refreshing cold water sources. Jesus uses this analogy because he knew the people would know exactly what he was referring to. The hot water of Hierapolis served a purpose in bathing and cleansing. The cold water of Colossae also served a purpose, refreshing drinking water – but the lukewarm, unpalatable water of Laodaicea was neither good for cleansing or drinking. Think of it this way - when your morning coffee is no longer hot and becomes tepid or lukewarm, you don’t want to drink another drop and, if so disposed, would literally spit it out rather than swallow it. Another idea which may or may not come into play was that chilled and warm wines were popular drinks at the time. When a guest arrived for dinner or a gathering, his host might offer him wine chilled with snow, or wine mixed with hot water. To be offered lukewarm wine was an insult to the guest and a mark against the host. The Laodiceans are likened to the lukewarm wine that a banquet attendee would despise. They are tepid, objectionable, and something to be vomited out of the mouth. This idea also fits with the overall imagery of the message to Laodicea, which ends with an explicit reference to a banquet. Further, the Laodiceans didn’t welcome Jesus as an honored guest, leaving Him outside the door knocking to get in - they were horrid hosts. On either account, hot or cold is acceptable in the eyes of God, but being neither on fire for God nor a thirsty seeker is not. He finds this state of being unabsorbed, bored and undecided an unpalatable middle ground to be spewed out of His mouth.
The overall state of the church today, especially in America, can very easily be described in the terms as Laodaicea – a boring, undecided and undedicated mess of a middle ground. The majority of churches today offer “a form of godliness, but deny the power of God” from operating within them. They are neither hot nor cold, but lukewarm, unpalatable and calcified with mediocrity. The church today in America is rife with political correctness, seeking a lukewarm middle ground in order to try and please everyone. Pastors are calcified with fear of losing members if they cross the line into preaching truth with power – that is IF they themselves walk in the same. Jesus refers to such as “wretched and miserable” and advises them to “be zealous and repent.” He tells them that He is standing at the door and knocking and, if answered, He will come in and banquet with them. The question is and has been for decades now, will the church respond to the knock. Will the church rid itself of "playing church" complacency and operate in the power that God has offered or will it continue in lukewarm mediocrity.
Posted by First Love Missions at 1:48 PM