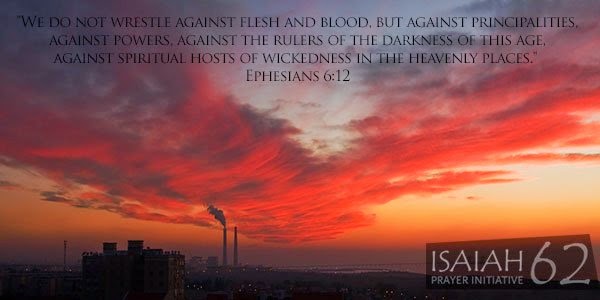 "We do not wrestle against flesh and blood, but against principalities, against powers, against the rulers of the darkness of this age, against spiritual hosts of wickedness in the heavenly places." (Ephesians 6:12)
During the recent conflict in Gaza, I had visitors coming from abroad to see me in Jerusalem. They were arriving late at Ben-Gurion Airport, so while waiting at home to go pick them up I decided to watch the latest news on TV and the Web.For several hours, I flipped on different TV news channels and opened my laptop to Israeli news sites. After this massive wave of reports, images, and analysis of current events worldwide, I stopped to think.

The Evil Behind the Scenes

The news media had brought coverage of the ISIS terror militia in Iraq, clashes in Libya, Hamas rockets in Gaza, hurricanes, earthquakes, and the Ebola virus in Africa. I also thought how terrorist groups like al-Qaeda, Boko Haram in Nigeria, and al-Shabaab in Somalia are adding to the chaos and human suffering in our world.


I could hear the words of Jesus echoing: "And you will hear of wars and rumors of wars. . . there will be famines, pestilences, and earthquakes in various places . . . look up and lift up your heads, because your redemption draws near" (Matthew 24:6-7; Luke 21:28).
The stage is slowly being set for King Jesus to return from heaven and deliver us from all evil!

But, I could see as well how, behind all this senseless violence by evil men in so many places, there was the influence of evil spirits, led by Satan himself!

Works of the Devil

Satan is no friend! He is the enemy of all humanity. Not only is he the father of all lies, but according to Jesus he is also a murderer who comes only to steal, kill, and destroy (John 8:44; 10:10). Unfortunately, we see his works all around.


Even though suffering in this life remains a mystery, the Bible is clear on this: Satan and his evil spirits can impact world events through the minds and actions of those people who agree with him (Ephesians 2:1-3). They are inspired and draw their power from evil sources. As a result, humanity is suffering, in confusion, filled with hatred, fear, and hopelessness.

Christian Suffering in the Middle East

It is painful to see the consequences of evil spirits ruling the lives of men. One sad expression of this murderous spirit at this time is the hatred of Muslim extremists towards Christians in the Middle East. Even while I am writing this, ISIS is beheading, crucifying, slaughtering and persecuting Christians by the thousands in Syria and Iraq.


Three hundred thousand Iraqi Christians have fled ISIS brutality this summer. They were given four stark choices: convert to Islam, pay the jizya tax, flee, or be murdered.
Hamas also constantly persecutes and threatens the small flock of Christians in Gaza.

What is it like to be a follower of Jesus in today's Iraq, Syria, Gaza, or other areas under Islamic rule? We really need to stop and think about it!
In our civilized Western societies, Christians are not being beheaded. Instead, it is relatively easy to follow Jesus. If any persecution comes, it is usually only verbal, or we may be shunned at work or our career advancement hindered. But, this is not the case in the Middle East, where Israel is the only true democracy that protects religious freedoms.


It is obvious that the spirit behind Islam is not the same as the Holy Spirit working in our lives. No, it is a spirit of anti-Christ, which wants Christians to submit as slaves under the rule of Islam. And, it is at physical war against Christians, wanting to eradicate them not only from the Middle East, but from all the earth!

However, we as followers of Jesus do not wage war against flesh and blood; that is, against human beings. We discern the spirit behind the evil deeds of men, and honor everyone as created in the image of God.


Our message is one of forgiveness and reconciliation in Jesus. That is, reconciliation first with God, and then between men of different religious, cultural, ideological, and ethnic backgrounds. The Gospel has the power to change lives. It is the message of hope for all peoples and cultures.
The character of God and fruit of the Spirit revealed in the person of Jesus is available for all men! (Hebrews 1:3; Galatians 5:22-23; Colossians 3:12-15; 1 Timothy 3:16)


Our weapons are spiritual and hope-filled. Their origin is in the goodness of God and they bring healing and truth to human hearts.

The Powerful Weapon of Prayer

So the Body of Christ needs to exercise their spiritual weapons, especially the power of prayer. We have been called to fast and pray for God's will to be done on earth, for Him to deliver us from evil, and bring down demonic strongholds (Ephesians 6:10-17; Colossians 2:15; Hebrews 2:14; Romans 16:20; Matthew 6:13).


We know His will for mankind is good, and that He wants righteousness and peace to prevail (Luke 2:14; Isaiah 2:1-4; 1 Timothy 2:1-7). This is why we wage war in the unseen world with our prayers to God.

The spiritual rulers of darkness manifest in real time, space, and history. These evil forces are influencing today's terrorist groups to ruthlessly kill Christians, and not to stop there but to target Israel and the Jewish people too!


Israel has been on the front-line of the battle against radical jihadists for many decades now, targeted by the exact same evil principalities as the region's Christians! Israel is actually fighting a spiritual battle against evil when protecting its own citizens.
It is truly part of our spiritual warfare "against the rulers of the darkness of this age" both to raise our voices on behalf of persecuted Christians under the thumb of radical Islam, and to stand alongside Israelis in their fight against this same evil.

Israelis refuse to give in to these wicked powers or let their destiny slip into evil hands. They boldly keep their destiny in their own hands, which upsets the international community. Many world leaders see Israel endangering other nations by courageously resisting evil.
But if these leaders, especially in the West, refuse to accept their responsibility and do not stand alongside Israel, they will soon experience the same spiritual evil invading their lands. This violent spirit seeks to physically attack Christians and Jews in many nations - Europe and the United States included. It wants to suppress our freedom to share God's word while also silencing any honest evaluation of Islam.


Hope for the Entire World

But I can see hope in the midst of all this, if the Church worldwide will catch the wind of the Spirit, repent and allow God to change us from within.
Will we keep the glorious destiny of the Church in her own hands and not yield it to the forces of darkness? Will we guard the treasures, spiritual weapons, and gifts entrusted to the Church? And, will we keep resisting Satan to the very end? (2 Timothy 1:14; James 4:7; Matthew 4:1-11)


This kind of Church will infuse hope to Israel and to all nations in our common struggle against evil!
Yours in Christ!