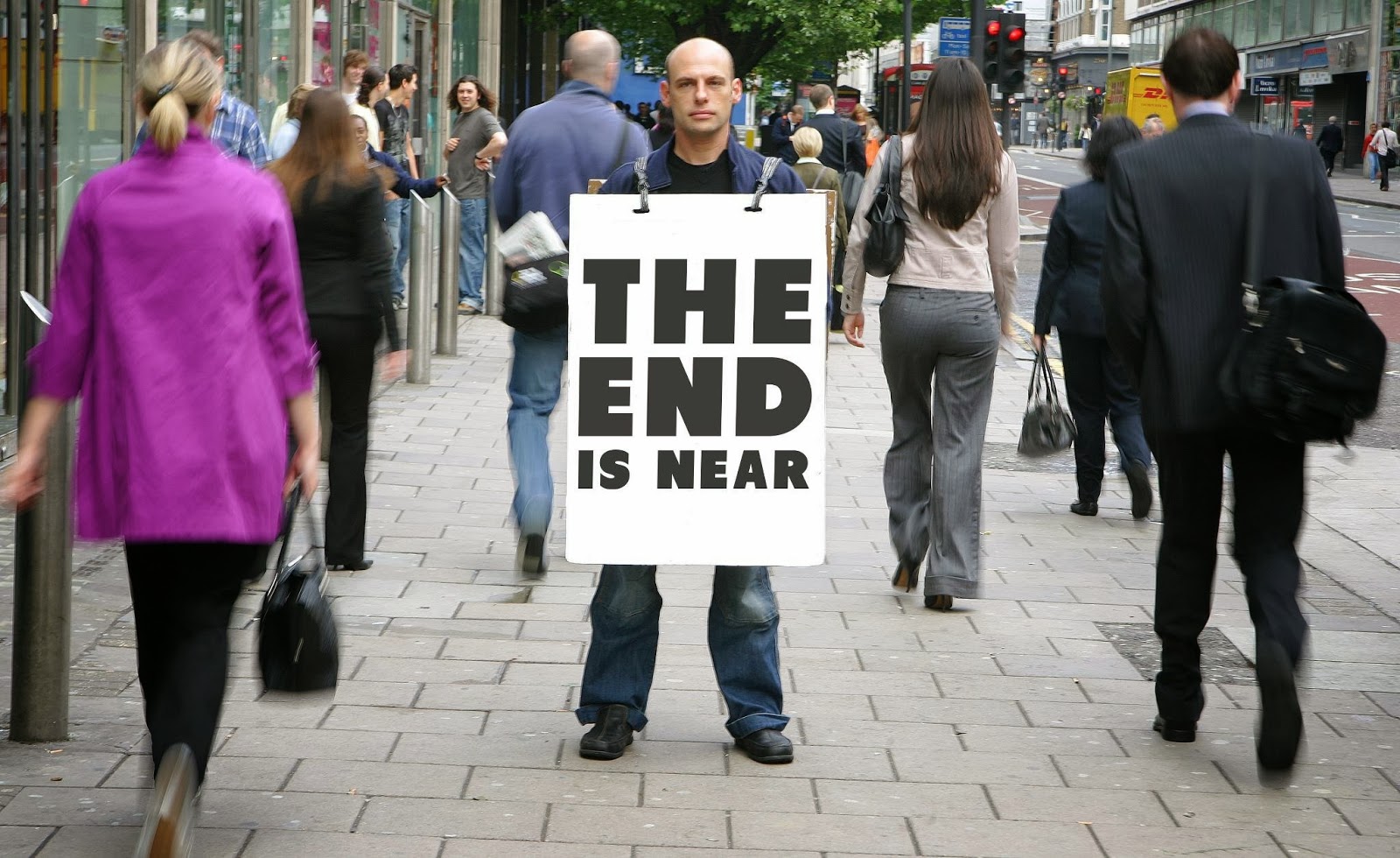 One of the most popular expressions heard amongst believers today is "The world is so terrible; Jesus must be coming any day now". The fact is that this expression has been popular since Christ ascended into heaven to be seated at the right hand of the Father. Folks must either have wishful thinking that Jesus would come back in their lifetime or some other reason for yelling from the rooftops, but that reason surely isn’t based in scripture.  There are two verses in scripture that do away with the notion that Jesus will return amidst utmost turmoil: 1 Thessalonians 5:2-3 tells us " For you yourselves know full well that the day of the Lord will come just like a thief in the night.3 While they are saying, “Peace and safety!” then destruction will come upon them suddenly like labor pains upon a woman with child, and they will not escape."

Does this sound like what's going on in the world today? Is there anyone saying "Peace and safety" when describing the current global environment? Better yet, in the present state of things, does it even seem likely that anyone could describe the world in those terms in the near future, even the next 10-20 years? Besides all this, it is an historical fact that even worse acts of sin and debauchery were going on at the time of Christ’s ministry – not much has changed as far as the behavior and disobedience of man is concerned - and if anything it has gotten better. Murder, rape, abortion, homosexuality and sexual perversion of every kind -  anything you can think of going on today was going on in Christ's time, and its very well documented.

People that blindly repeat what they hear, without scriptural verification, need to start comparing the word of God against what others say before repeating what they have heard, no matter how big a name the speaker may have. I don’t know about you, but I have heard some teachings from very well-known and respected Pastors that, when compared to the word of God, were just plain wrong – and blatantly wrong.  But then this speaks volumes to a bigger problem today, the fact that the overwhelming majority of Christians in the United States never crack a Bible outside of Sunday morning – IF they read it then! And if they do it is only to follow along numbly while the Pastor reads one or two verses. If they never read the Bible in between Sundays it would take over 300 years to read the entire book! We simply (and ignorantly) repeat what we hear from the pulpits as if it were Gospel instead of the word of God, with the attitude of “Well Pastor Bob said it so it must be true”. After all, Pastor Bob is never wrong, right? We need to constantly be comparing what we hear from any man to what the word of God has to say on the subject, any subject. This requires not only reading the word of God every single day, but studying the word! And there is a huge difference. No one should have to tell any true believer that they need to stay in the word. In the true believer there is a hunger for the word of God! If we miss one day it should feel like a hole in our stomach, like we haven’t eaten or drank anything - because we haven't! Stay in the word!

In the case of Christ’s return, the word specifically says that Christ will return during times of seeming  “peace and safety” – and in order for there to be peace and safety (however false), the anti-Christ must come into place, set up the ‘new world order’ deceiving tens (if not hundreds) of thousands of believers, who will bare his mark, and bring about that false feeling of peace and safety. Then and only then will Christ come back.

First off, it needs to be said, as Jim Croft put it in his most recent article HERE, that there is a big difference between signs and judgment. While signs can happen completely at random, judgment is a very specific act by God. Scripturally speaking, judgment happens as the result of humankind’s disobedience to God. For the purposes of this discussion, I’ll use the flood of Noah’s time. Genesis 6:5-13 tells us of the atmosphere on earth before God sent the flood that destroyed it. These passages specifically mention three attributes, attitudes and behaviors that man had created on earth that lead up to its destruction, namely widespread wickedness, corruption and violence. If you watch or read the news today, these three general topics is 90% of what the news covers, especially local news – and this is repeated on every local news channel. The headlines are all about who’s cheating, stealing from or killing who. It is my opinion that while the world today is not yet set up for the second coming of Christ, due to prophecies not being fulfilled as stated in the above information, it is certainly well established in wickedness, corruption and violence, making it ripe for judgment. As the U.S. is still the leading force in the world, even though we are quickly becoming (or have already become) a third world country in some respects (technology, manufacturing, etc), and is first to create many of the trends, both social and moral, that are adopted globally, it's not hard to imagine us being the primary target of God’s wrath. This isn’t just because we are so corrupt because corruption is rampant in every country on the planet today, but because if America falls, so shall the world. In the wake of the financial devastation alone the entire planet would yield to total chaos – leaving a timely opportunity for the anti-Christ to be ushered in as ‘savior’ to the world's problems. This will be much like what happened in Nazi Germany. The people saw Hitler as the savior of their country, building it up at least in psychological morale for a short time. And exactly the way it happened in Germany, good Christian folks will either worship him on bended knee or simply look the other way, ignoring the horror while concentrating on the false positives – playing out the charade until it’s too late. Once the anti-Christ is established, he will cause the false security of “Peace and safety” mentioned in 1 Thessalonians, paving the way for the return of Jesus.  So, America could be a key element in the establishment of the anti-Christ - even with the remnant here. And while this is all conjecture at this point, it is a fact that the United States of America does not exist, at the very least as we know it today, according to end time scriptures. When you consider all of this information and how it ties to scripture, it does give one pause.

To top it off, there are very well-known American prophets today that are jumping all over the upcoming tetrad blood moons of 2014-15 as signs of the coming judgment on the U.S.  In addition, if the U.S. does fall, Israel would lose its biggest supporter and ally. This event would certainly fall into the historical ramifications of the tetrad blood moons. Of the seven times throughout history that tetrad blood moons have occurred, four have coincided with drastic changes, mostly of hugely negative impact, for the Jewish people (For more on the Blood Moons, read HERE)

In the end (pun intended) when in doubt, consult the one source that has all the answers, IF you study it, the Bible.

~ May the blood of Jesus cover, bless and protect you!
Mark