The Protestant Reformation and the “Five Solas” 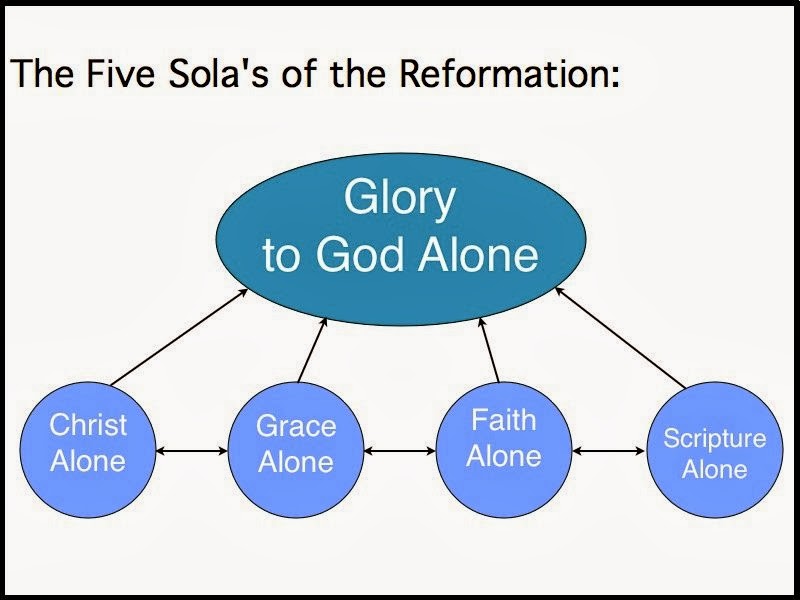 The “five solas” is a term used to designate five basic theological principles, in contrast to certain teachings of the Roman Catholic Church, which became the pillars of the Protestant Reformation. The reformers were acting on the rightful conviction that the Catholic Church of their day (as well as today) had drifted away from the essential, original teachings of Christianity, especially in regard to what it was teaching about salvation and how people can be forgiven of sin:  through the death and resurrection of Jesus Christ, and receive eternal life. The Reformation sought to re-orient Christianity on the original message of Jesus and the early church and they set as their foundation five principles.

These five principles are as follows:

These “five solas” were developed in response to specific perversions of the truth that were (and are still) taught by the Roman Catholic Church. All five implicitly rejected or counter the false teachings of the Catholic Church, which had usurped divine attributes or qualities for the Church and its hierarchy, especially its head, the Pope. Let’s take a look at these basic Christian principles and how they differ from the corruption perpetrated by the Catholic Church.

The Reformers denied this and instead said that our only foundation is scripture – or sola scriptura. When the reformers used the term sola Scriptura, what they meant is that the Bible alone, as the breathed word of God, is our ultimate authority - not the pope, not the church, not the traditions of the church or church councils. In justification Christ's righteousness is imputed to us as the only possible satisfaction of God's perfect justice.

John 17:17 states clearly, “Sanctify them by the truth; your word is truth.”

Throughout the New Testament it is the written word of God, and that alone, to which Jesus Christ and His apostles refer to as the final authority. Not any man (such as the Pope), certainly not any tradition or ritual – just the word direct from almighty God. And really, isn’t that enough when you think about it? Does it make sense that the creator of everything in the universe could somehow be improved upon by a human being? This is what the Catholics teach and want you to believe. Please don’t. Instead turn to the word of God.

There’s a passage from 1 Corinthians 2:14-15 that specifically cautions us against relying on what man – any man – has to say, over what the Holy Spirit instructs us:

“Now we have received, not the spirit of the world, but the Spirit who is from God, so that we may know the things freely given to us by God, 13 which things we also speak, not in words taught by human wisdom, but in those taught by the Spirit, combining spiritual thoughts with spiritual words.”

Further, Proverbs 30:5-6 states that, “Every word of God is tested; He is a shield to those who take refuge in Him. 6 Do not add to His words Or He will reprove you, and you will be proved a liar.”

This statement speaks for itself in this matter. Anything but the word of God will be shown to be a lie. The Scriptures are our ultimate and trustworthy authority for faith and practice. This doesn’t mean that the Bible is the only place where truth is found, but it does mean that everything else we learn about God and his world, and all other authorities, should be interpreted in light of Scripture.

Every word of the 66 books of the Bible is inspired by God’s Holy Spirit. The Holy Spirit also helps us to understand and obey Scripture. The Bible gives us everything we need for our theology and, as such, any other information we get must be measured against scripture. The issue here is that in order to know scripture we must read it and for years the Catholic Church actually instructed parishioners not to read the Bible. This has been shared with me by many former-Catholics and it is no wonder why. If you read and study the word of God (and NOT the purposefully slanted Catholic Bible) you will know that the Catholic Church is lying, plain and simple.
The Catholic Church teaches that we are justified by faith and the works that we produce, which the righteousness that God infuses in us through faith brings about.
Catholicism does not hold strictly to grace and grace alone, as described in scripture as being God’s gift of salvation to us, but rather that somehow we can earn our way to heaven by “doing good”. According to the word of God this concept is false teaching.

Ephesians 2:8-9 says” For by grace you have been saved through faith; and that not of yourselves, it is the gift of God; 9not as a result of works, so that no one may boast.

The reformers responded by stating that we are justified by faith alone, which lays hold of the alien righteousness of Christ that God freely credits to the account of
those who believe.

Christ himself stated in 2 Corinthians 12:9, “My grace is sufficient for you”

In turn, the reformers responded, “sola gratia”, meaning that, as stated in scripture, it is only by way of God’s grace that we are saved – period. We are saved solely through faith in Jesus Christ because of God’s grace and Christ’s merit alone. We are not saved by our merits or declared righteous by our good works. God grants salvation not because of the good things we do, and despite our sin.

When God created Adam and Eve, He gave them total authority over Earth and all in it. They even named the animals! But, when they directly disobeyed God in the Garden of Eden, Satan became that authority on Earth. From Adam & Eve we inherited a nature that is enslaved to sin. Because of our nature, and the influence of Satan and His minions, we are naturally enemies of God and lovers of evil. When we are born into this world we are born sinners. To think that man can overcome these factors to ever do enough good is ludicrous at best, but this is what the Catholic Church teaches.

Our hearts need to be regenerated, or made alive, so that we can have faith in Christ. God graciously chooses to give us new hearts so that we are able to trust in Christ and are saved through faith alone.

God graciously preserves us and keeps us. When we are faithless toward him, he is still faithful to us. We can only stand before God by his grace. Jesus’ life of perfect righteousness is counted as ours, and our records of sin and failure were counted to Jesus when he died on the cross. Apart from grace and the regenerating work of the Holy Spirit that flows from it, no one would be saved, since in our lost condition, human beings are not capable of God’s grace.
The Reformers countered with the correct belief, according to scripture, that God has given the ultimate revelation of himself to us by sending Jesus Christ and it is only through God’s gracious self-revelation in Jesus do we come to a saving and transforming knowledge of God.

Colossians 1:15 states “He is the image of the invisible God, the firstborn of all creation.”

Acts 4:10-12 states explicitly: “let it be known to all of you and to all the people of Israel, that by the name of Jesus Christ the Nazarene, whom you crucified, whom God raised from the dead - by this name this man stands here before you in good health. He is the stone which was rejected by you, the builders, but which became the chief corner stone. And there is salvation in no one else; for there is no other name under heaven that has been given among men by which we must be saved.”

Romans 3: 23-24 says, “for all have sinned and fall short of the glory of God, being justified as a gift by His grace through the redemption which is in Christ Jesus”

Christ’s sinless life and substitutionary atonement alone are sufficient for our justification, and any gospel that fails to acknowledge that, or denies it, is a false gospel that will save no one. It is grace alone, expressed through the supernatural work of the Holy Spirit, that brings us to Christ, releasing us from our bondage to sin and raising us from death.

Justification is a declaration of God based on the work of Christ. It flows from God’s grace and it comes to the individual not by anything he or she might do but by faith alone. Justification is by grace alone through faith alone because of Christ alone!

·         Soli Deo Gloria, glory to God alone:   Each of the great solas is summed up in this, the fifth principle. The Catholic Church adheres to what Martin Luther called the “theology of glory” (in opposition to the “theology of the cross”), in which the glory for a sinner's salvation could be attributed partly to Christ, partly to Mary and the saints, and partly to the sinner himself.

Scripture tells us that the only true gospel is that which gives all glory to God alone as God’s glory is the central motivation for salvation, not improving the lives of people—though that is a wonderful by product. God is not a means to an end—he is the means and the end. The goal of all of life is to give glory to God alone.

Romans 11:36 says “For from Him and through Him and to Him are all things. To Him be the glory forever. Amen.”

Since all things come from God, and to God, then it is only logical to conclude ‘to God alone be the glory.’

Today, the Catholic Church teaches these same essential perversions of truth; and much of Protestantism has seen a regress to many of the same corruptions in many denominations - but not anywhere near the level of the Catholic Church. The Romans added so many human achievements and attributes to Christ’s work, so that it was no longer possible to say that salvation was entirely by Christ and his atonement. This was and is the most basic of all heresies that the Catholic Church has perpetrated on the world since the Council of Nicaea in 325 AD.

Remember this if nothing else from this article: if any authority departs from Bible teaching, they are to be judged by the word of God and to be rejected.