A Hebrew Hour is defined as 1/12 of the time between sunset and sunrise, or 1/12 of the time between sunrise and sunset. The only Scriptural reference to there being 12 Hebrew Hours in a Hebrew Day is found in John 11:9 where Yeshua ( יהושע ), Jesus the Messiah asked the question, "Are there not 12 hours in a day?"
The Torah, the Prophets and the Writings do not number specific Hebrew Hours. Only the Messianic Scriptures number specific Hebrew Hours in Matthew, Mark, Luke and Acts. 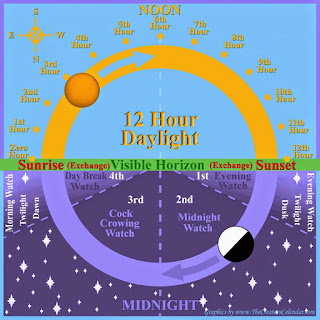 The Watches of the Night (Age of the Torah)

In the Age of Torah the time between sunset and sunrise was divided into three watches. The evening watch is alluded to by Moses in Psalms 90:4. 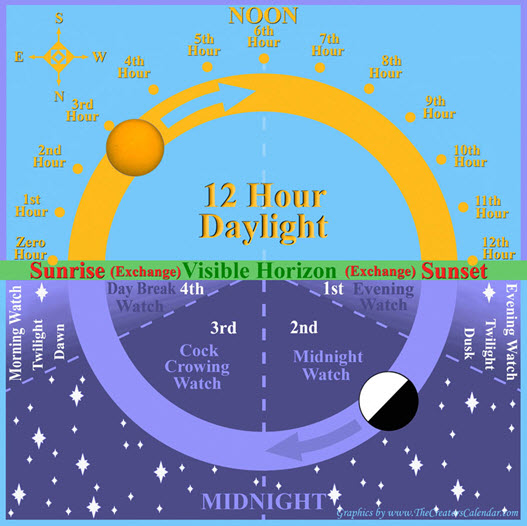 Psalms 90:4 For a thousand years in Your sight are as one day when it is past, as a watch in the night [the evening watch].

The Four Watches of the Night  (Age of the Messiah)


Since the time of the Age of the Messiah (coming of Yeshua), the time between sunset and sunrise was divided into four watches.

·         Sunset occurs and the First Watch begins exactly at the beginning of the first Hebrew Night Hour.

Sunrise is always exactly at the beginning of the first Hebrew Day Hour.

Mid-day occurs exactly at the end of the sixth Hebrew Day Hour.

Sunset occurs exactly at the end of the twelfth Hebrew Day Hour.

The Watches in Scripture:

**These verses are the reasons behind to the common name of the fourth watch – ‘the watch of miracles’.

To this day in Israel, when prayer teams need fast action in answer to prayer, they meet at 4am!

This is also the time that God has come to Mark since His prodigal return - with answers to prayer, prophecy and even his baptism in the Holy Spirit. Praise God!

Watches During the Ages 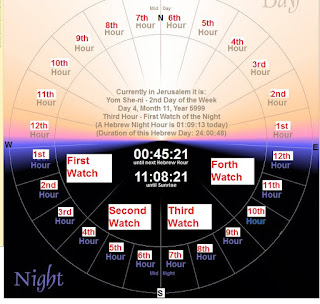 There are always 12 Hebrew Night Hours and 12 Hebrew Day Hours in a Hebrew Day. This diagram represents a typical Hebrew Day in which the duration of both the nighttime and the daytime hours are about the same. This occurs twice a year around the time of the fall equinox and spring equinox.

A Long Hebrew Day in Summer

In this diagram, a Hebrew Day Hour is longer in duration than a Hebrew Night Hour. This occurs in summer. The daytime hours are the longest on the day of the summer solstice.

In contrast to Matthew, Mark, Luke and Acts, the book of John, as it now exists in the Greek manuscripts, numbers hours from midnight as the Romans did.

·         Pilate questioned Yeshua the Messiah at the sixth hour Roman reckoning according to John 19:14 which is the twelfth Hebrew Night Hour or 6am.

·         Yeshua the Messiah sat at Jacob's well at Sychar at the sixth hour Roman reckoning after a tiresome journey according to John 4:6 which is the twelfth Hebrew Day Hour or 6pm.

·         A nobleman travelled the better part of a day from Cana to Capernaum and met Yeshua the Messiah at the seventh hour Roman reckoning according to in John 4:52 which is the first Hebrew Night Hour or 7pm.


Pliny the Elder, Natural History 2:77: "The very day itself men have observed in various manners. The Babylonians count the period between the two sunrises, the Athenians that between two sunsets, the Umbrians from midday to midday, the common people everywhere from dawn to dark, the Roman priests and the authorities who fix the civil day, and also the Egyptians and Hipparchus, the period from midnight to midnight."


Today, the Gregorian Calendar counts civil hours from midnight similar to the way the Romans did.

The Duration of a Hebrew Day 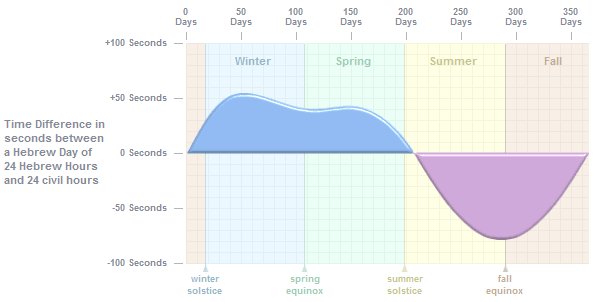 Accuracy of Sunrise and Sunset Times


"A change of temperature from winter to summer can shift the times of sunrise and sunset by about 20 seconds in mid-northern and mid-southern latitudes. Similarly, observing sunrise or sunset over a range of barometric pressures leads to a variation of a dozen seconds in time."
Jean Meeus, Astronomical Algorithms, Second Edition, p.101.


"Near the horizon unpredictable disturbances of the atmosphere become rather important. According to investigations by Schaefer and Liller, the refraction at the horizon fluctuates by 0.3° around a mean value [34 minutes of arc] normally, and in some cases apparently much more ... it should be mentioned here that giving rising or setting times of a celestial body more accurately than to the nearest minute makes no sense." Jean Meeus, Astronomical Algorithms, Second Edition, p.107.

A Hebrew Day begins and ends at the moment of sunset on the Creation Calendar. The time of sunset is defined as the moment the trailing edge of the sun's disc disappears below the horizon to the west, as seen by an observer at a particular location on earth. At sunset, the true position of the sun is about one sun diameter below the horizon, yet delayed visibility occurs due to the bending of light through the atmosphere as a result of refraction. Sunset should not be confused with night. The time between sunset and night is called evening twilight. The time between night and sunrise is called morning twilight. 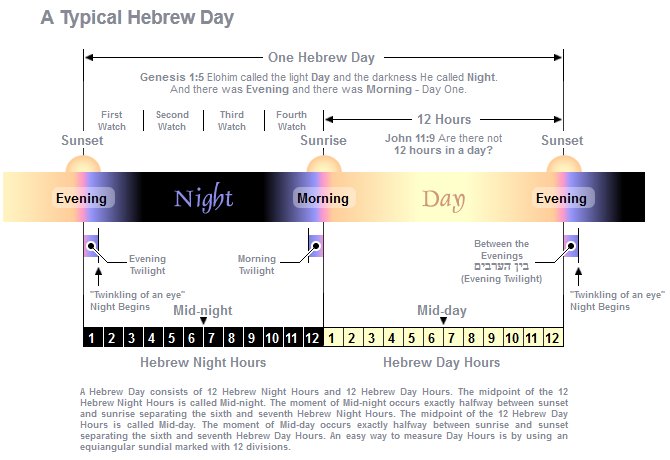 A Hebrew Day begins at sunset and transitions from evening twilight to night to morning twilight to day to sunset. The first half of a Hebrew Day lasts from the moment of sunset to the moment of sunrise. The Scriptures divide the time between sunset and sunrise into four watches, each containing three Hebrew Night Hours. The second half of a Hebrew Day lasts from the moment of sunrise to the moment of sunset. Sunrise is defined as the instant at which the upper edge of the sun's disc appears above the horizon in the east, as seen by an observer at a particular location on earth. As atmospheric refraction causes the sun to be seen while it is still below the horizon, both sunrise and sunset are in a sense optical illusions.

In Hebraic thought, evening twilight is understood as a transitional period between day and night. It is currently understood that it is evening twilight as long as two stars of medium magnitude are visible, but it is night upon the appearance of a third star of medium magnitude. In ancient times, some understood that night begins in a moment in time which is impossible to determine called the twinkling of an eye. This is interesting, as Paul prophesied that the righteous would be resurrected in the twinkling of an eye.

1 Corinthians 15:51-52: Behold, I tell you a secret; We will not all sleep, but we will all be changed. In a moment, in the twinkling of an eye, at the last trumpet, for it shall sound, and the dead shall be raised incorruptible, and we shall be changed.

Thus says the Lord, ‘If you can break My covenant for the day and My covenant for the night, so that day and night will not be at their appointed time, then My covenant may also be broken with David My servant so that he will not have a son to reign on his throne, and with the Levitical priests, My ministers. As the host of heaven cannot be counted and the sand of the sea cannot be measured, so I will multiply the descendants of David My servant and the Levites who minister to Me.’ - Jeremiah 33:20-22