Elisha and the Double Portion 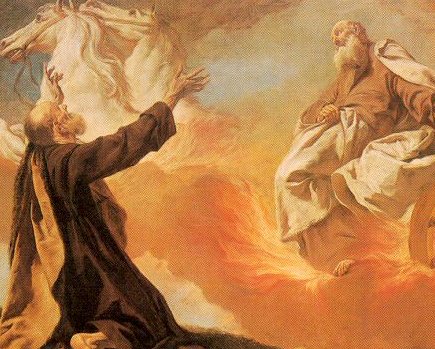 What is the secret of the “Double Portion Anointing?” This brief study may shed some light on the subject. There are many different interpretations on the matter in both the pursuit of scriptural insight and its application in our lives. Most instances include the seeker asking someone they deem anointed to pray for them to receive a double portion of the anointing that they in turn will walk in. It is like asking someone for their mantle, or Superman for his cape. This comes from the encounter in 2 Kings 2:9-11:

“When they had crossed over, Elijah said to Elisha, “Ask what I shall do for you before I am taken from you.” And Elisha said, “Please, let a double portion of your spirit be upon me.” He said, “You have asked a hard thing. Nevertheless, if you see me when I am taken from you, it shall be so for you; but if not, it shall not be so.” As they were going along and talking, behold, there appeared a chariot of fire and horses of fire which separated the two of them. And Elijah went up by a whirlwind to heaven.”

I have heard people say that when someone asks them for a double portion that they feel sorry for them because of all that they had gone through to attain to the “level” of revelation and anointing that they are walking in. In one sense I feel that the term “double portion” is overused and abused. Many go from place to place and from minister to minister asking them all for double of what the minister is walking in. The attitude, however, is not entirely wrong, that desire to “share” in the same Spirit another has with the Lord. As the Body of Christ, this kind of fellowship (as written in Ephesians 4:4) is vital to our growing together and become one body in one Spirit.


What Is a Double Portion?

According to Deuteronomy 21:15-17, if a man had two sons, instead of splitting the inheritance fifty-fifty, he had to divide it into three parts, giving two thirds to the firstborn (the “double portion”) and one third to the second born son. Most people have mistakenly believed that the double portion meant “twice as much”; it simply means “double share.”

So what’s the big deal? It’s a matter of spiritual realism. We can’t give something we don’t have, naturally or spiritually, and we can’t impart a double anointing - that is entirely up to God. So, this passage does not refer to someone laying hands on you and you instantly receiving twice as much anointing as the person praying for you. No, this is about a share of Spiritual inheritance issued directly from the Father. Instead of one share, Elisha wanted double – the right of a firstborn.

So what does this “share” consist of? What was Elisha to receive as an inheritance, besides an old robe? Elijah grants Elisha one last wish. His request is bold - a “double share” of Elijah’s spirit. The “double share” is one more portion than is normally distributed. The phrasing is odd because “double share” refers to something quantifiable, but Elijah asked for ‘rûah’ - the energy and authority of Elijah, none of which is quantifiable. Elisha asked to be invested with Elijah’s power as a prophet.

The significance is that Elisha receiving Elijah’s mantle made him the new prophetic voice to Israel, walking in even greater power than Elijah himself! It follows that if Elijah couldn’t give something greater–or twice as much as he had to Elisha–then how was this possible? Because Elisha experienced Elijah’s ministry and relationship with God, and then he began his own, coupled with the fulfilled promise from God to bestow the double portion - compounding the effect!

Just as it took a lifetime for Elijah to come to the place where he was taken to heaven–a lifetime to attain to that “level” of revelation – it was vital for Elisha to see him and experience that revelation with him, so Elisha could start where Elijah left off. Elijah’s ministry culminated with the same revelation that began Elisha’s ministry. If we see him when he leaves we will start where he left off, just as the disciples did with Jesus.

The point is that though we may not be able to receive double portion anointings from people we can receive revelations in which they have spent their lives for and apply that knowledge and revelation to our lives. Instead of starting over for ourselves, we start at the level they leave at. I believe that this is the reason the spirit of Elijah is coming again in the last days.

I reconsidered these things because recently when Cathie and I prayed for the healing of a woman with ovarian cancer, we both received instant confirmation and then the Lord gave Cathie an immediate prophetic word for the woman, telling her how God was going to use her to do things in the Spirit in her home country of Jamaica. Others have been placed there of course but she would go after them and apply what she experienced in a new way – and bring thousands to God. This opened up my spirit to new revelation on the transfer between Elijah and Elisha.

The culmination and application for us in this specific sense is this: Over the course of life God reveals things to people. In the ministry of the kingdom we share what God shows us with others. These may be things that have taken our whole lives to comprehend or things that He reveals to us on the spot! The really cool thing is that He did not just do it for ourselves, or even the recipient - the entire body benefits so that others can take our revelation and run with it, as is written in Habakkuk 2:2:

"Then the LORD answered me and said,
Record the vision
And inscribe it on tablets,
That the one who reads it may run."

What is the double portion anointing? It is the fact that we inherit what previous generations had, and then we can add that to our own anointing - like pouring fuel on a fire. This is exactly what God had written in Deuteronomy 28:1-13 and exactly what He has done with me in the past year – I have spiritually inherited my mother’s ministry in the Spirit.

This revelation also opened up my eyes to whole new perception into the ascension of Jesus. He gathered the disciples together and said:

"For John baptized with water, but you will be baptized with the Holy Spirit not many days from now…  but you will receive power when the Holy Spirit has come upon you; and you shall be My witnesses both in Jerusalem, and in all Judea and Samaria, and even to the remotest part of the earth. And after He had said these things, He was lifted up while they were looking on, and a cloud received Him out of their sight." ~ Acts 1:5 and Acts 1:8-9

The disciples saw Jesus ascend to heaven and were instructed to go to Jerusalem and wait for the baptism of the Holy Spirit. They were to await their mantle. The same way that Elijah left Elisha his mantle, Jesus was sending the Holy Spirit to His disciples.

After Elisha had received Elijah’s mantle, the sons of the prophets declared in 2 Kings 2:15, “The spirit of Elijah rests on Elisha.” They recognized the same anointing. A similar thing happened to the disciples after they were baptized in the Holy Spirit:

“Now as they observed the confidence of Peter and John and understood that they were uneducated and untrained men, they were amazed, and began to recognize them as having been with Jesus.” ~Acts 4:13

Just as the revelation did not leave with Elijah, it did not leave with Jesus either. They both left their mantles to the next generation. What the disciples spent the last few years of their lives watching Jesus do,  He was now calling and empowering them to do. And not only that, He was calling them to do even greater things, because now they would have full capacity to relate to him in the Holy Spirit and not just physically.

“Truly, truly, I say to you, he who believes in Me, the works that I do, he will do also; and greater works than these he will do; because I go to the Father.” ~John 14:12

I believe that everything we discussed gives us awesome insight into understanding the verses that I want to leave us with. These verses in Ephesians encompass everything I have tried to share in this article.

“I pray that the eyes of your heart may be enlightened, so that you will know what is the hope of His calling, what are the riches of the glory of His inheritance in the saints, and what is the surpassing greatness of His power toward us who believe. These are in accordance with the working of the strength of His might which He brought about in Christ, when He raised Him from the dead and seated Him at His right hand in the heavenly places, far above all rule and authority and power and dominion, and every name that is named, not only in this age but also in the one to come.” ~Ephesians 1:18-21