The Bible - By The Numbers 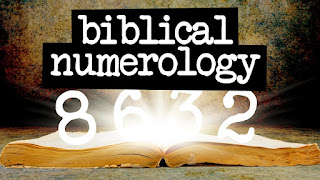 I’ve always had some degree of fascination with numbers. My step-Father, Jim Chandler, beside being a tremendous man of God, was a professor of mathematics and a master mathematician, as are both of my brothers (I know!). He used to always say, “Numbers don’t lie” and “Of all the things that you learn in school, math will help you the most in life” True, of course…but then my Mother was a professor of English Literature and would say the same thing about the English language and the communication thereof. Having numbers pounded into my head from a very young age, I later, much later, developed an appreciation for what my step-Father used to tell me – and for math and everything numbers related.

I recently became fascinated with numbers as they relate to the Bible and Christianity. “What, you say?" Yes, there are certain numbers that keep popping up over and over again in scripture and are, obviously, important to God. In addition, some Biblical numerical facts will just plain astound you. So, let’s take a very basic look at, well…The Bible by the numbers.

1 – The number one stands for ‘unity’ or ‘significance’. Used to describe anything that is emphatic or important. For example:

·         In Ephesians 4:5, it says “"one Lord, one faith, one baptism." That’s pretty emphatic and very important in Christianity. In Matthew 6:24, it says “No one can serve two masters…” True that, logic dictates that, from a numbers point of view, 1 does not ever equal 2.
·         In Mark 12: 28-29, when asked by a teacher which was the most important commandment,  Jesus answered saying, “Of all the commandments, which is the most important?” 29 “The most important one,” answered Jesus, “is this: ‘Hear, O Israel: The Lord our God, the Lord is one. 30 Love the Lord your God with all your heart and with all your soul and with all your mind and with all your strength.
·         In Philippians 2:2 Paul and Timothy speak about the Christian lifestyle saying “complete my joy by being of the same mind, having the same love, being in full accord and of one mind.”
There are a myriad of examples of the number one, but I think you get the gist.

2 – The number two represents an ‘opposition’ or ‘division’. Think of the phrase ‘two-faced’. You have one thing (in this case) that is actually made up of two that represents totally opposite outlooks or functions. From a Christian perspective, this can be represented by Jesus Christ – a son that has two natures: human and divine.

·         There are two Testaments, old and new, that make up the Bible.
·         In Genesis 1:27 it states that man is either male or female; “God created man in His own image, in the image of God He created him; male and female He created them.”
·         In Matthew 12:32 it states that there are two ages, this age and the age to come.
·         In Genesis 25: 23 when God speaks to Rebekah about the twins that will birth, he says, ““Two nations are in your womb; And two peoples will be separated from your body; And one people shall be stronger than the other; And the older shall serve the younger.” The two nations referred to, the Edomites and Israelites, have been from the beginning two such different people in their manners, customs, and religion, as to be at perpetual variance among themselves.

4 - The number four represents God’s creative works, especially...
works associated with material things of the earth – all things under the sun. If three represents God (the Trinity) then four is 3 +1 (God + Creation).

5 – Stands for Divine Grace and power (4+1 or God’s gifts & blessings to Man). Gifts and power of the Holy Spirit fall under this number.
*Abraham and Sarah were transformed by grace to become the parents of a family from which the Messiah would be born

Seven is a significant number in the natural world as well:

8 – The number eight represents ‘new beginnings’ or ‘regeneration’ and the ‘number of the Lord’ – the Lord’s people or the Lord’s work.

SEVEN AND EIGHT TOGETHER:  These numbers form a remarkable connection.  As we have noted seven, according to its etymology, means that which is spiritually complete, while eight denotes that which is superabundant.  God’s holy covenant name is expressed in Hebrew by the four consonants YHWH which have a value of 10, 5, 6, and 5.  Added together their total is 20 + 6 but multiplied by 3 (the Triune God) their value is 70 (7x10) + 8 or spiritual perfection times perfection of order plus superabundant salvation.

Yahweh's covenants are also seven and eight: Seven covenants are revealed in the Old Testament and the eighth covenant in the New Testament, in the New Covenant in Christ:
The classes of furniture in the desert Tabernacle and in the Temple reflected both the numbers 7 and 8.

9 - Nine is the number of ‘finality’ or ‘judgment’. This number is related to the number six, being the sum of its factors (3x3=9, and 3+3=6).  It is significant of the end of man and the sum of all man’s works.
There are 9 greek words derived from the root word meaning judgment or  dikay.
The following words each occur 9 times in the Bible: abussos (bottomless pit); asebee (ungodly); aselgeia (lasciviousness); and astrapee (lightning).
Then, the gifts of the spirit are 9 in number (1 Corinthians 12:8-10): the word of wisdom, the word of knowledge, faith, healing, miracles, prophecy, discerning of spirits, tongues, and interpretation of tongues.

11 – Eleven represents ‘disorder’ ‘lack of fulfillment’ or ‘imperfection’ because it is one short of 12, the number of governmental perfection.
*Although Matthias was chosen by the remaining eleven Apostles, there is a good argument that Paul (Saul of Tarsus) was chosen by Jesus Himself (as was every other Apostle) as the twelfth Apostle on the road to Damascus as described in Acts 9:3-5. I say this because it is evident that  the Lord considered that one of the qualifications for apostleship was that each of the apostles should be given “infallible proofs” that Jesus had been raised from the dead – and he appeared to every other Apostle but no to Matthias, according to scripture.  In I Corinthians 15:8-9, Paul describes it this way, “He appeared to me also, For I am the least of the apostles”. But then, like Paul, you have the argument that anyone ‘sent out’ is an Apostle. This comes from the orginal Greek word ‘a‧po′sto‧los’ which is derived from the common verb’ a‧po‧stel′lo’, meaning simply  “to send forth”. If nothing else, the subject makes for very interesting conversation :)

15 - This number symbolizes acts wrought by the energy of Divine grace (3 x 5;   5 = grace, and 3= Divine perfection of the Godhead).
17 - Perfection of spiritual order. The seventh prime number.
·  Jacob lived seventeen years in Egypt [Genesis 47:28].
·  Seventeen can mean double spiritual perfection plus the completion of Divine will = 2 x 7 + 3.
·  Seventeen is also the sum of two perfect numbers 7 + 10 = perfection of spiritual order. For example, see Romans 8:35-39 and the series of seven blessings in the form of questions followed by ten answers.  Also see Hebrews 12:18-24 where the Old Covenant and New are contrasted­­­­.  Seven statements refer to Old Covenant and ten to the New.  In both these New Testament passages, the New (10) is superior to the Old (7).
·  The seventeenth of Nisan during Passion Week was the Old Covenant Feast of Firstfruits.  It was also the day of Jesus’ Resurrection when He defeated sin and death [Leviticus 23:11-14; Matthew 28:1-6].

20 - Signifies ‘expectancy’. Its significance seems to be connected with the fact that it is one short of twenty-one.  That is to say, if twenty-one is the three-fold seven, and signifies divine (3) completion as regards spiritual perfection (7), then twenty, being one short of twenty-one would signify expectancy.  There are numerous illustrations in Scripture to support this explanation

30 - Being 3 x 10 this number denotes in a higher degree the perfection of divine order, as in marking the right moment in God’s Divine plan.

40 - This number is recognized as an important number both on account of the frequency of its occurrence and with the uniformity of its association as a time of consecration and as a period of trial.
70 - SEVENTY: is another combination of two of the perfect numbers 7 and 10, and it signifies perfect spiritual order carried out with all spiritual power and significance.

Seventy elders were chose to meet with God on Mt. Sinai and ate a sacred meal in His presence; they represented the hierarchy of the Old Covenant Church [Exodus 24:9-10]
153 – This is a number which has perplexed the greatest of Biblical scholars.  The common thought is  that there must be something significant about this number from the way in which it is introduced in John 21:11: “Simon Peter went up and drew the net to land, full of large fish, a hundred and fifty-three; and although there were so many, the net was not torn.”

And finally, if you multiply the three perfect numbers of the Bible together - 3,7,10 & 12 - you get 2520. 2520 is the Least Common Multiple of the ten digits governing all numeration; and can, therefore, be divided by each of nine digits, without a remainder.

It is the number of chronological perfection (7 x 360). This also the times of Israel’s punishment and the times of Gentile dominion over Jerusalem. Also, it is the summary of all the primary rectilinear forms!

And if you think that we’ve exhausted all the information on the math of the Bible – you’d be wrong. There are volumes on nothing but the perfect math of the scriptures. Even further proof that God is great – and perfect.