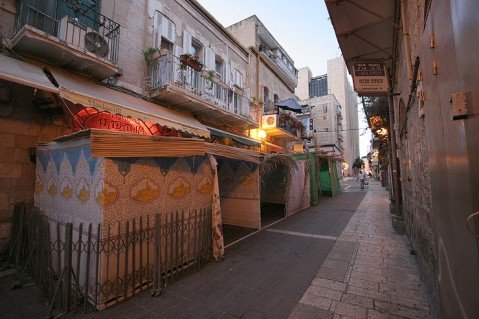 A typical street in Jerusalem during the Feast of the Tabernacles


Moses instructed the children of Israel to gather for a reading of the Law during Sukkot every seventh year (Deut. 31:10-11). King Solomon dedicated the Temple in Jerusalem on Sukkot (1 Kings 8; 2 Chron. 7). And Sukkot was the first sacred occasion observed after the resumption of sacrifices in Jerusalem following the Babylonian captivity (Ezra 3:2-4).
In Leviticus, God told Moses to command the people: "On the first day you shall take the product of hadar trees, branches of palm trees, boughs of leafy trees, and willows of the brook" (Lev. 23:40), and "You shall live in booths seven days; all citizens in Israel shall live in booths, in order that future generations may know that I made the Israelite people live in booths when I brought them out of the land of Egypt" (Lev. 23:42-43).

The following is a letter from my (Mark) sister, Jeni Meredith, who, along with her husband, Fred Meredith, hosted dozens of trips to the promised land in the 70's and 80's:

There were 6 annual Feasts called the feasts of the Lord. These were special times for God’s people to worship and come before Him. The complete lists of the Feasts is in Lev 23. They fall naturally into 2 groups – The first all related to Passover  ( Unleavened Bread, First Fruits, and Pentecost ). In the second group, all observed during Tishri, the sacred seventh month, the feast of Trumpets, the Day of Atonement and the Feast of Tabernacles ( booths) – all called the Fall Feasts.

We have just come through Yom Kippur last week. Now, my favorite time of year – the celebration of the Feast of Tabernacles. This  feast – called  Sukkot, was a time when all of God’s people come before Him to celebrate. When you come, you bring yourself – the best gift of all to Him. This is the time when we thank Him for the new birth. For the Jewish people, they  build for  themselves booths on their porches and live in them, calling to memory the years they spent in the wilderness, in tents, moving on in their pilgrimage through the desert. 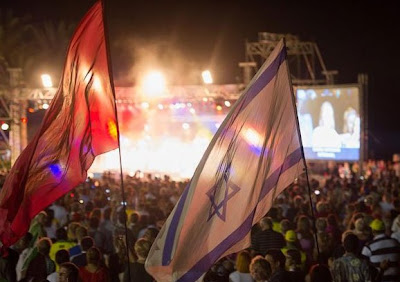 We are only pilgrims passing through this life. Because we have a Saviour, we can rest in the knowledge that He knows us each by name, and cares continually for us.
This is the only Feasts that has a prophecy of coming glory attached to it. In Zech 14, we are told that the day will come, when all the nations of the world will come up  to Jerusalem to celebrate the Feast.  I have been in Jerusalem during this special time twice in my life. Believe me, there’s nothing like worshipping with people from around the world ! Very different and glorious  to say the least !

Let me encourage all of you to continue in your prayers not only for this nation, but also for Israel. Remember, God chose Israel to be His special people. If you are a Believer in Jesus, you have been grafted into the olive tree (Israel). God is doing a work in these days, to knit together those Believers – Jew and Gentile alike. His name be praised!

For Zion’s sake I will not keep silent, and for Jerusalem’s sake I wil  not keep quiet, until her righteousness goes forth like brightness, and her salvation like a torch that is burning. And the nations will see your righteousness, and all kings you glory, and you will be called by a new name, which the mouth of the Lord will designate.  You will also be a crown of beauty in the hand of the Lord, and a royal diadem in the hand of your God ( Isaiah 52-10)

Shalom and love to all,
Jeni Meredith